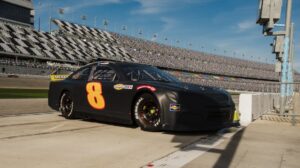 Empire had a fantastic test weekend in Daytona! Sean Corr finished with the 4th best time. He said, “I was really excited to be back at the track with his empire racing crew.” They all have been working hard all winter on this new superspeedway car and he can’t wait for the race in February. Rich Bickle had the 9th best time and mentioned that after 21 years of not being at Daytona, going into turn one when you get up to speed against the wall was pretty interesting again. To get back with Mike Cheek after 25 years is exciting.  Prior to the test Corr and Bickle had not met or raced alongside but worked well with one another for some production runs.

We are so proud of the team, including drivers and all crew members to make the weekends fun and full of improvements. Stay tuned for updates on the upcoming race.

You may have missed

Up next for Sean Corr the “Tricky Triangle” Pocono Raceway

Tribute To A Champion